Road safety is a serious issue and despite years of hard-hitting advertising campaigns that drove home the potentially deadly implications of unsafe behaviour on the road, the message just wasn’t having the desired impact.

Dorset Police challenged us to change this culture of ambivalence by creating an impactful road safety campaign that would alter people’s behaviour.

This was to be an all-encompassing, multi-channel campaign that would resonate with the target audience across all forms of communication; social media, radio, door drops, websites, billboards, anywhere where we could change the attitudes of road users across the county. 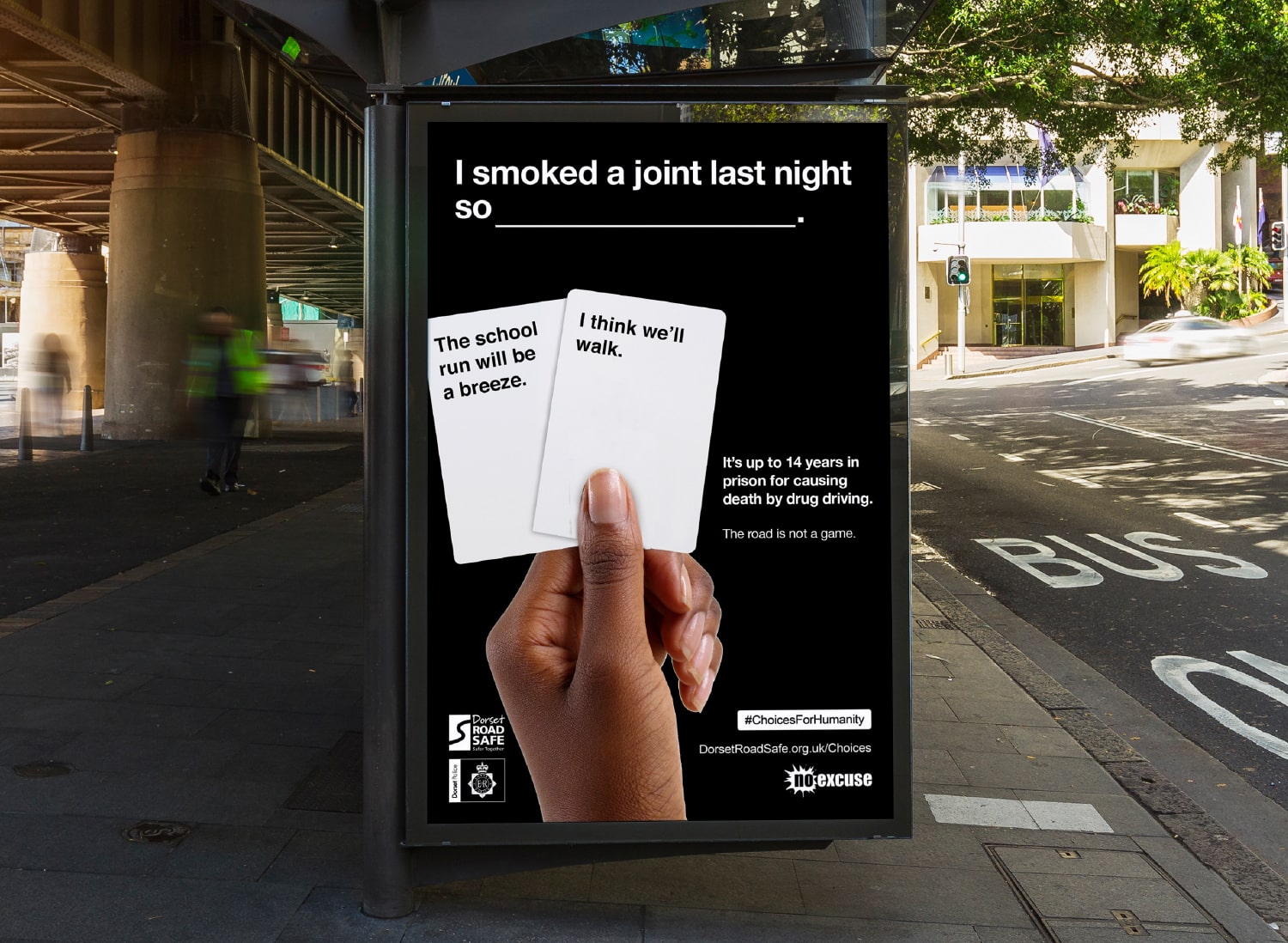 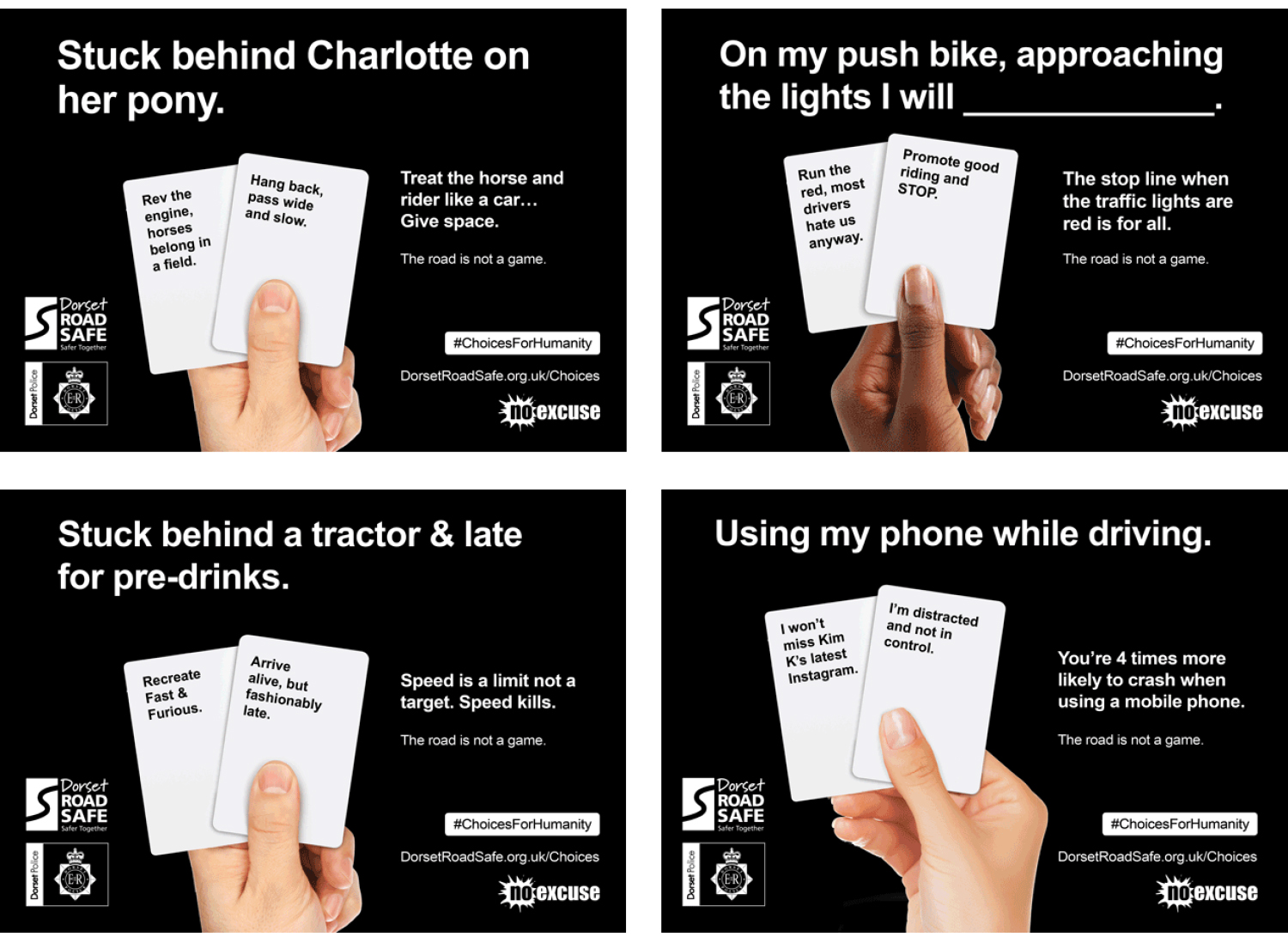 We started by asking ourselves a simple question; Do you think we can tell people to be more respectful and they simply will be? And from there we began to employ our disruptive thinking ethos to the problem at hand.

Road safety awareness campaigns are typically emotive with an emphasis on the life-changing outcomes such as death, serious injury and imprisonment. In opposition to this is humour, and in the popular new game Cards Against Humanity we saw an opportunity to repurpose a mechanic to use some subtler, edgier messaging that would cut through the noise that fear-mongering had been unable to.

We wanted to engender a greater feeling of empathy among drivers without being patronising while empowering other road users to feel safer, which is when we began to evolve into a concept of ‘respect’. Literally defined, the noun means, “due regard for the feelings, wishes, or rights of others.”

Seizing upon these two ideas, we found a unifying theme in ‘choices’. As individuals, it is our choice whether we respect others, something clearly self-evident in attitudes between cyclists and non-cyclists for example. Similarly, the defining game mechanic in Cards Against Humanity is the player’s choice in how to fill the blank and generate a reaction. These concepts helped us realise what became #ChoicesForHumanity. 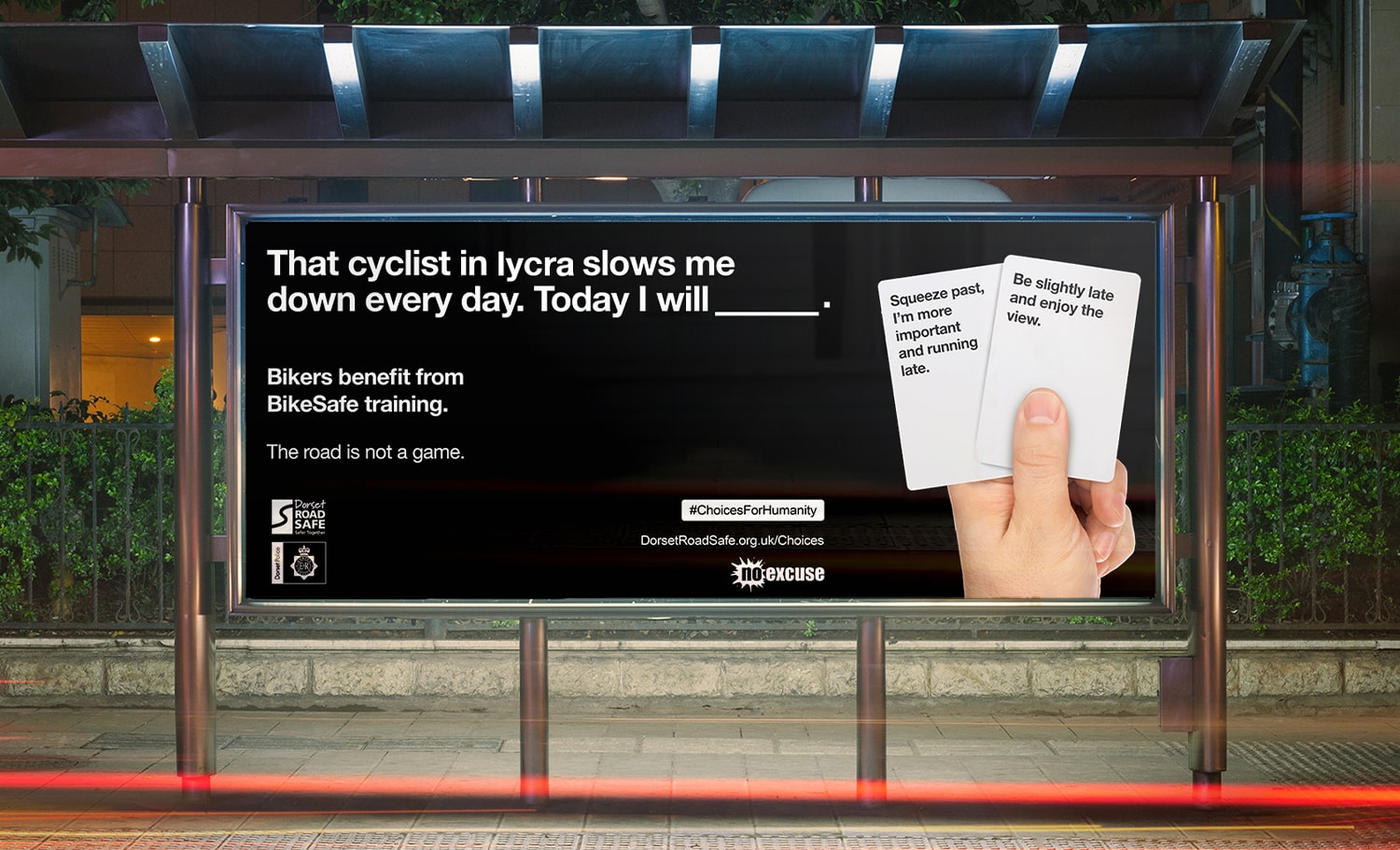 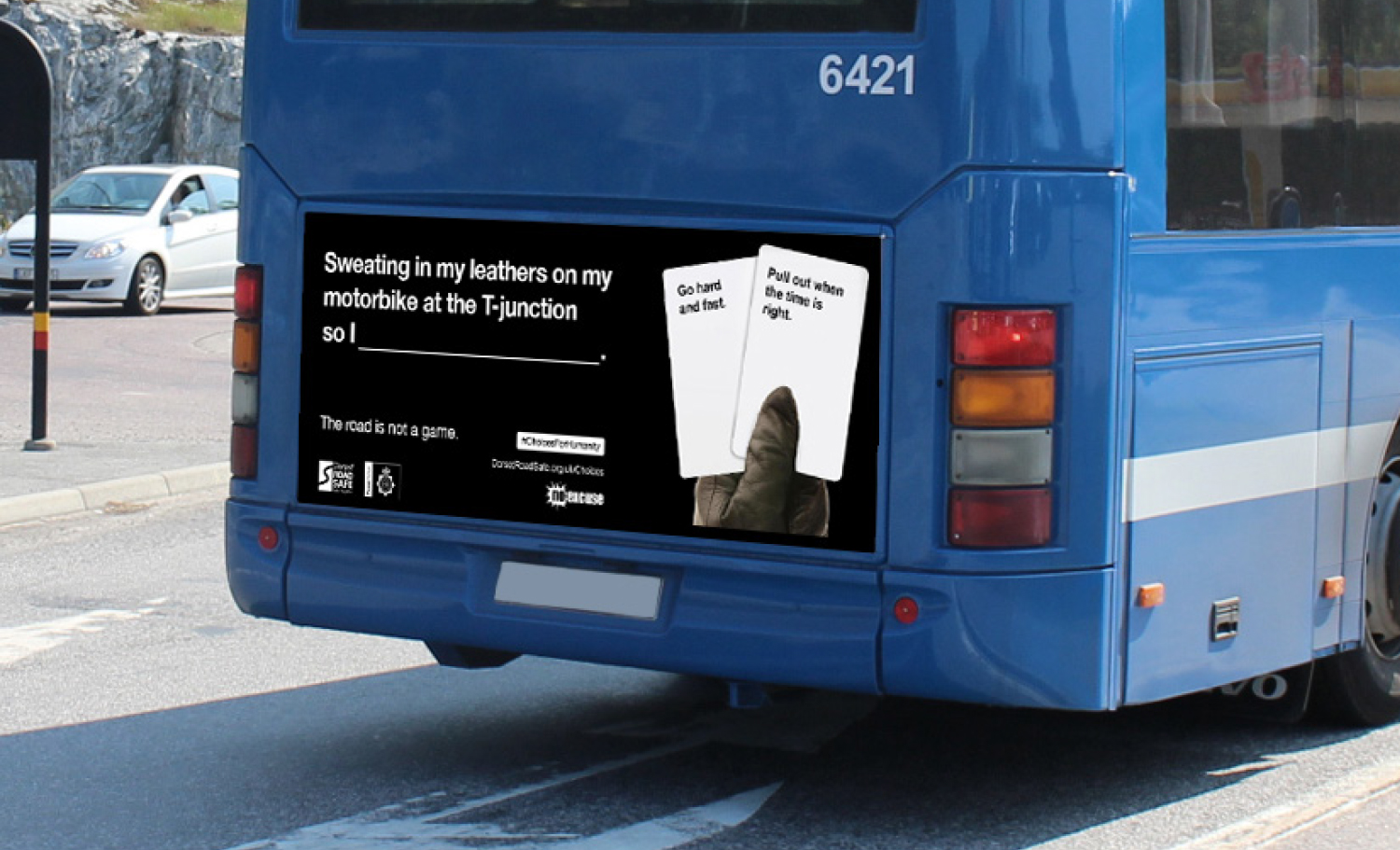 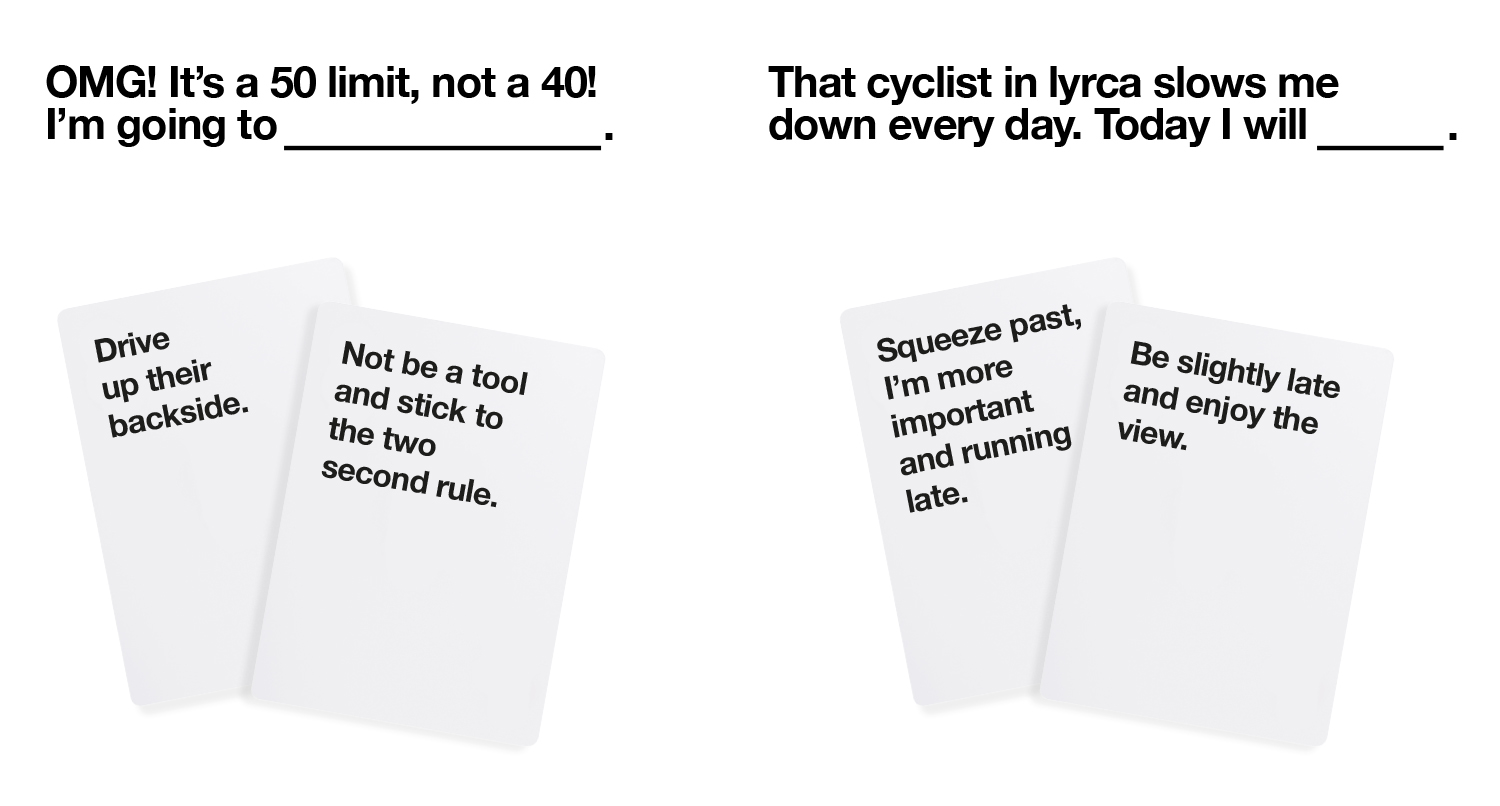 “It is vital that we continue to find new and innovative ways to prevent casualties on our roads.

Everyone would like to think they are a considerate driver, but sometimes life gets in the way and one error of judgement can sometimes have catastrophic consequences.

This unique and innovative campaign will hopefully remind us that we are all human and have the ability to make the right choices and show humanity towards each other.” 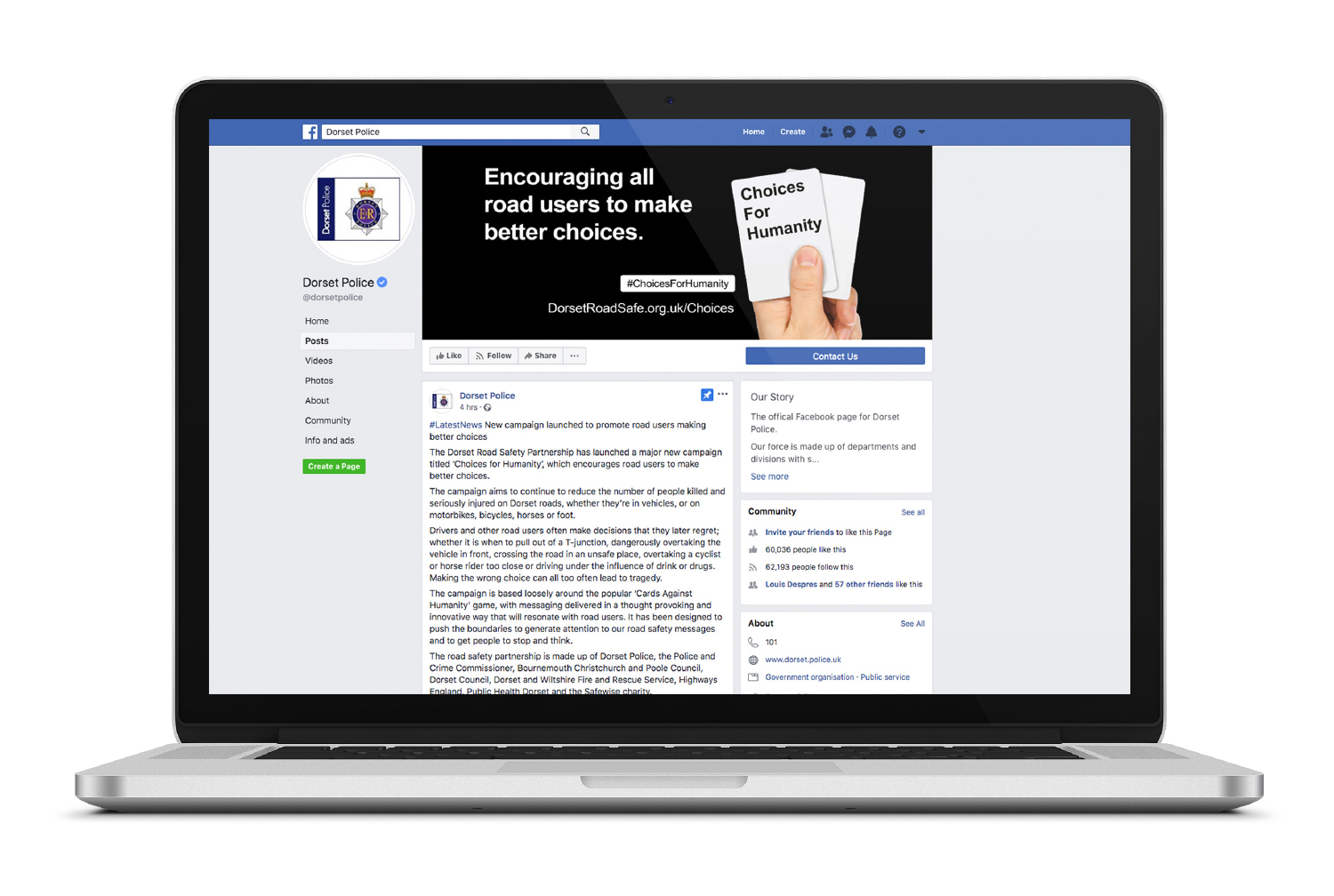 Find out more
We use cookies on our website to give you the most relevant experience by remembering your preferences and repeat visits. By clicking “Accept All”, you consent to the use of ALL cookies. However, you may visit "Cookie Settings" to provide a controlled consent.
Cookie SettingsAccept All
Manage consent

This website uses cookies to improve your experience while you navigate through the website. Out of these, the cookies that are categorized as necessary are stored on your browser as they are essential for the working of basic functionalities of the website. We also use third-party cookies that help us analyze and understand how you use this website. These cookies will be stored in your browser only with your consent. You also have the option to opt-out of these cookies. But opting out of some of these cookies may affect your browsing experience.
Necessary Always Enabled
Necessary cookies are absolutely essential for the website to function properly. These cookies ensure basic functionalities and security features of the website, anonymously.
Functional
Functional cookies help to perform certain functionalities like sharing the content of the website on social media platforms, collect feedbacks, and other third-party features.
Performance
Performance cookies are used to understand and analyze the key performance indexes of the website which helps in delivering a better user experience for the visitors.
Analytics
Analytical cookies are used to understand how visitors interact with the website. These cookies help provide information on metrics the number of visitors, bounce rate, traffic source, etc.
Advertisement
Advertisement cookies are used to provide visitors with relevant ads and marketing campaigns. These cookies track visitors across websites and collect information to provide customized ads.
Others
Other uncategorized cookies are those that are being analyzed and have not been classified into a category as yet.
SAVE & ACCEPT
Powered by